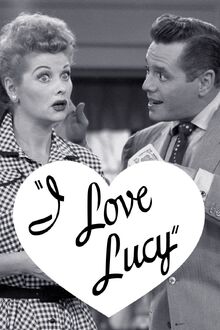 I Love Lucy is a popular 1950s American television sitcom that originally ran on CBS from October 15, 1951, to May 6, 1957, with a total of 180 half-hour episodes spanning 6 seasons (including the 'lost' original pilot and Christmas episode). The show starred Lucille Ball, her real-life husband Desi Arnaz, Vivian Vance and William Frawley. It followed the life of Lucy Ricardo (Ball), a middle class housewife in New York City, who either concocted plans with her best friends (Vance & Frawley) to appear alongside her handleader Ricky Ricardo (Arnaz) in his nightclub, or tried numerous schemes to mingle with, or be a part of show business.

Community content is available under CC-BY-SA unless otherwise noted.