Let's Go Luna! is an animated series created by Joe Murray, who also made Rocko's Modern Life and Camp Lazlo. It premiered on PBS affiliates on November 21, 2018. In the first season, there are 38 half-hour episodes and a one-hour special. The second season has 26 episodes and premiered on May 10, 2021.

Andy the frog, Leo the wombat, and Carmen the butterfly are best friends. Their parents work at the Circo Fabuloso, a circus that travels the world, so Andy, Leo, and Carmen are in new places all the time. They learn about the different countries of the world with the help of Luna The Moon, who comes down from the sky each day and sprouts arms and legs. 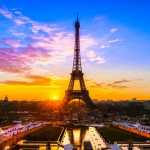