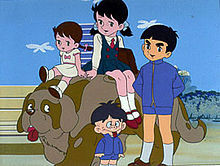 Little Miss Akane is a shōjo manga series by Tetsuya Chiba. It was serialized in Shōjo Friend, published by Kodansha, from April to September 1968. It was adapted into a monochrome 1968 Toei anime series with the same name directed by Fusahito Nagaki, Yasuo Yamaguchi, Yugo Serikawa and Takeshi Tamiya, which was originally broadcast on Fuji TV.

A cute young girl, Akane formerly lived in the countryside with her grandfather, but decides to return home to Tokyo and go to a prestigious school. However, coming from the country has its downfalls and Akane soon realizes that she doesn't fit in with the snobby rich kids at school. Nonetheless, she finds a friend in a delinquent kid named Hidemaro. He is consistently the victim of bullying and Akane begins to stand up for him. At school, the pair find a dog which they ironically name Chibi despite its great stature. Akane, Hidemaro, and Chibi begin their zany, comedic misadventures.

Community content is available under CC-BY-SA unless otherwise noted.